I’m doing another Tiktok testing post, because why not? They may get banned next week anyways haha.

So I made a gaming news post on Tiktok - we’ve done this test before, kind of.

1 is a video (last time we did the pictures but put it in video mode, this time I made it into a video before uploading), MP4. 1 is just the pictures in photo mode. The last is MY FACE! I went out of my way to actually go past my unreasonable fears and do a face video again. I tricked myself into thinking that it was all for this test and I had to do it. Thus this post was born LOL.

Unfortunately, only the video and the photo mode were posted at the same time, with the idea of the face video coming in much later.

My hypothesis is that the Tiktok’s AI can TELL that your video is just pictures, even if it was uploaded as a video (not video mode for pictures within Tiktok).

So to test that out, I made the same news video but with my face to see which one will be pushed out the most. I will update hopefully in a few hours if not tomorrow. Currently it’s been a few hours since I posted the first two, and about 10 mins since I posted the face video. Right now, the photo mode has 5x’d the video of photos again (our first test was 10x, but probably a shorter amount of time).

Alright it’s been 16 hours so here’s an update! My hypothesis was WRONG. I think. 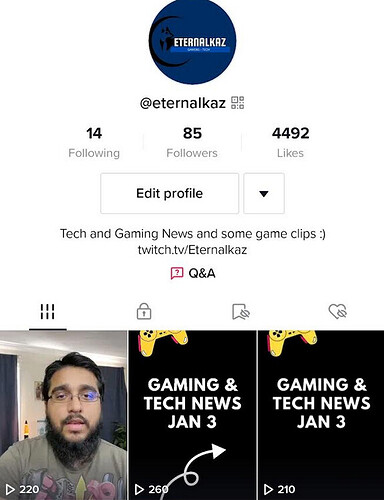 As you can see, all three videos get about the same “views” but there are some interesting stats!

The middle video (the photos in photo mode) got the MOST views, but also extremely quickly. I’m talking about it peaking around 245 within 1-2 hours. Then stagnated, with 3 or 4 more every few hours.

The other two videos got to the number you see above but it took many many hours. BUT -

Right now Tiktok has not given me any more data. I also gained 3 followers.

So I think its clear to me that photos in photo mode will garner the fastest views. but maybe not the most views in the long term. The MP4 of photos gained 6 more views as I was typing this post putting it almost to the same views as my face.

What are your thoughts?