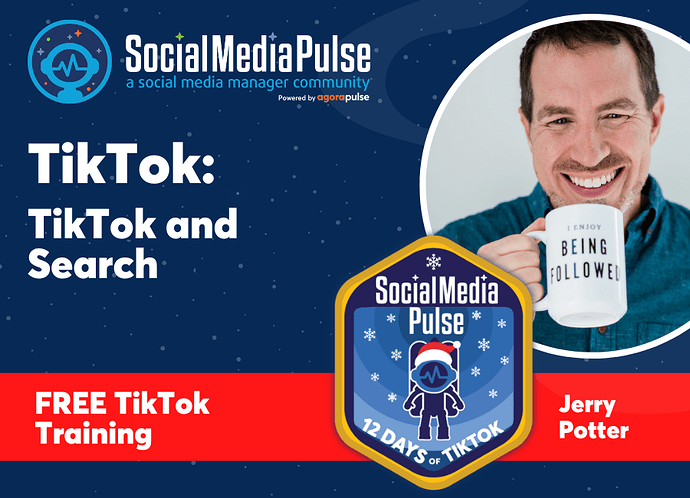 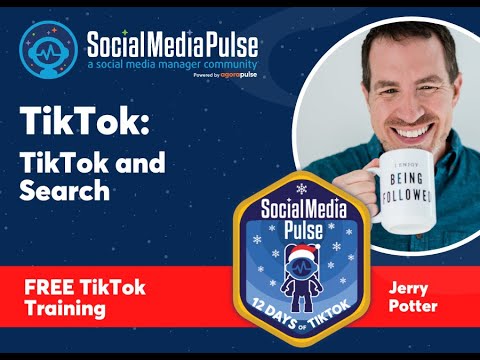 I’ve seen a lot of business owners avoiding jumping on TikTok, and I completely get it.

“Oh my gosh, another platform! Can’t we all just agree to be on one platform?”

But the truth is, it is an incredible opportunity for a number of reasons, one of which it’s becoming a search engine. People are using TikTok like Google.

When we look at a new platform, we’ve got to decide if it’s worth our time. The beauty of TikTok is that it’s not a platform where you’re going to have to slog through for the next two years, and then all of a sudden maybe you’ll get a new client or a customer from it. The opportunity is there now to be getting people right away.

I look at TikTok and, even if it went away in 90 days, I’m going to benefit from it in those 90 days. You can get on there and you can start reaching people quickly.

Another thing that I think is a great opportunity for TikTok: often, if you took a picture and a caption on Instagram and put the same picture and caption on Facebook, they didn’t perform the same because they were two different platforms, whereas short-form video interacts and engages very similarly, whether it is a TikTok video, an Instagram reel, a Facebook reel, or a YouTube short. So if you’re already focusing on one of those other platforms, I think it’s an easy opportunity.

But the biggest thing–and this was the thing that really just kind of made my eyes and ears perk up, like, oh my gosh, TikTok has got to be included in our marketing repertoire–is that it is becoming a search engine. People are going in and they are using it to search for things.

Initially, this data came from TikTok–and of course they’re going to tell us that, right? TikTok came out and said 58% of TikTok users discover new brands and products on the platform, and 44% discovered something they immediately went out to buy. So initially it came from TikTok and I was thinking, okay, that’s interesting; I guess I can believe that.

To compare it to Google, when you type in two words in Google, it’ll bring up four or five suggestions in the dropdown below the search bar, and it will show you other things people are searching for. And it’s really helpful because sometimes you don’t know how to ask the question to get the right results. Now TikTok is doing that same thing, and that data is obviously coming from people searching.

I don’t consider myself somebody who goes on TikTok to shop. It’s just not something I do; I go to Google to search and find out things like that. However, even when I’m just watching TikTok, I find out about new things all the time.

A couple weeks ago, Apple released an update to their computer operating system to OS, and you can now use your iPhone as a webcam just by holding it up to the top of your MacBook and it’ll automatically connect. I saw that on TikTok and I thought it was fake, a camera trick. So I Googled it. Next thing you know, I wasn’t buying anything, but I immediately updated my software because I wanted to play with this new feature that Apple had released.

So that is the big opportunity on TikTok: not only is that where the eyeballs and the hours are being spent by consumers, the fact that it’s becoming a search engine, it’s becoming entertainment, it’s becoming shopping, research, all of these things that we want to be in front of if we are marketing our products or services.

TikTok’s algorithm has been called one of the most advanced in the world. I don’t know anything about computer code or any of that stuff, but it is creepy. Even if you create a brand new TikTok and you start scrolling, you’ll probably enjoy the videos that they show you. It’s creepy how quickly they can figure out what we like. And so all of this comes down to obviously tons of data points that I know nothing about, but the biggest thing that I would recommend if you’re going to start on TikTok, spend some time just watching videos on the platform just to kind of see what it’s like. It is similar to Reels, but there are some cultural differences. Click on the comments, see what people are saying, things like that.

The second thing is, don’t be intimidated. You will see some of the most amazing videos in the world on TikTok, but that doesn’t mean that your video of you just talking won’t get in front of a bunch of people anyway.

Same thing for business owners. Maybe add tips and tricks or strategies or different things like that, because it’s the keywords that are going to help you get found.

One thing to keep in mind is that people open TikTok to be entertained and intrigued. They’re not opening it to buy stuff in general (with a few exceptions, makeup and clothing and things like that, that are a little bit more lifestyle). So you do have to talk about things in a slightly different way to get people’s attention.

Just like all the other platforms, TikTok doesn’t want people clicking off the platform all the time. So if you are sending people off of TikTok all the time, that’s potentially a downside. But it’s still just an incredible opportunity overall to get in front of lots of new people without having to spend thousands of dollars on ads.

If you want to learn more about TikTok or any of the other social media platforms, I send out daily social media tips and you are welcome to join the thousands of entrepreneurs that get those just by going to DailySocialMediaTips.com !

Jerry Potter @jerry
I help overwhelmed business owners create a revenue-driving social media plan they can actually keep up with through my YouTube channel Five Minute Social Media and courses/memberships.

Have you optimized your TikTok for searchability?

Good point on not being intimidated. Yes there are great visuals on Tiktok but some viral moments were just a camera facing someone.

Tiktok becoming a search engine can be good and bad… but let’s hope it ends decent.

I think with Google we can see it as a text based search engine, where people are mainly served text and websites. While Tiktok is a video seach engine, for those that like video more than text. Your answers will be in forms of video and audio.