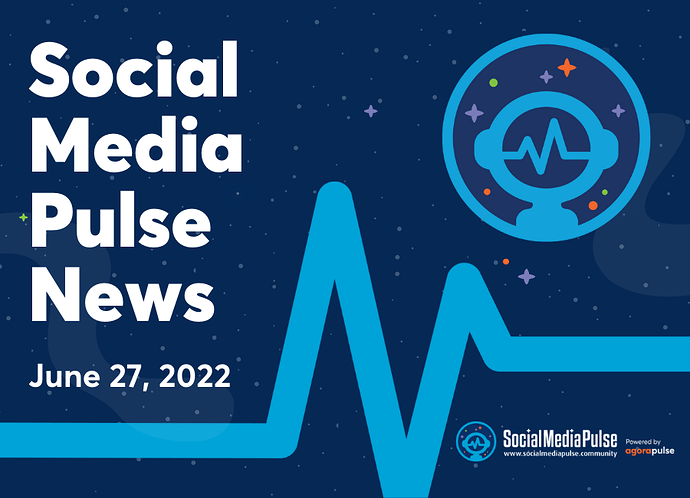 36 leading technology companies including Adobe, Microsoft, Epic Games, and Meta have announced the formation of The Metaverse Standards Forum , which will determine agreed-upon open standards for metaverse tech.

Meta’s new Avatars Store offers more ways to customize your 3D avatar with digital outfits to purchase from major fashion brands including Balenciaga and Prada. The store’s wares are currently only available for FB, IG & Messenger but will be rolling out to Meta’s VR environments soon. 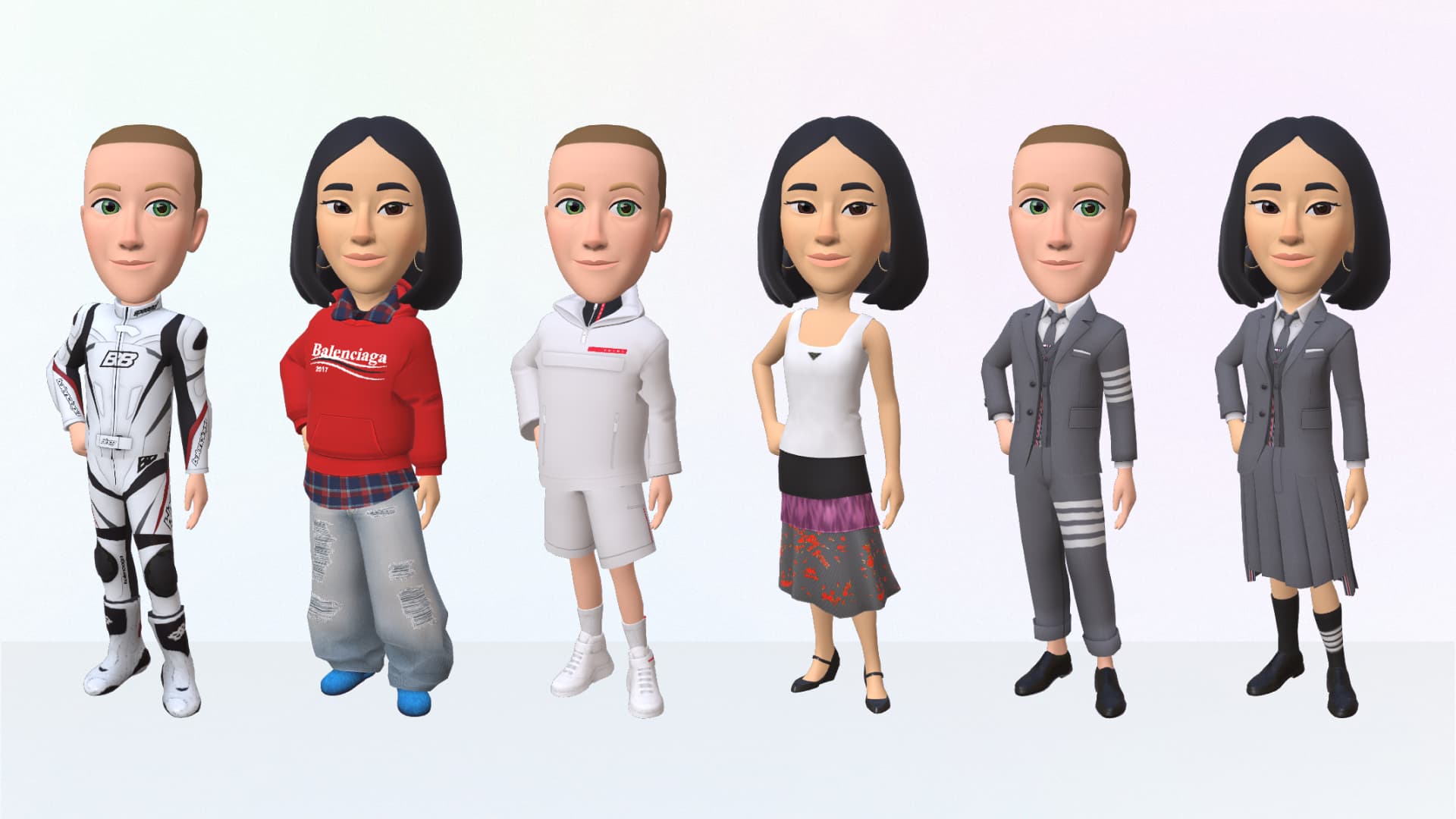 In light of expanded creator monetization updates—including expanded monetization eligibility and new cash bonuses for popular Reels—FB & IG have announced they now won’t take a cut of creator revenue til 2024 , an update on last year’s declaration that revenue sharing would begin in 2023. This also applies to pre-existing monetization channels including paid events, subscriptions, and badges.

Meta’s ad algorithms are getting an adjustment after a Department Of Justice settlement with the Department and Housing and Urban Development regarding enablement of housing discrimination. The revised algorithm will also aim to prevent discrimination in ads related to employment and credit.

Facebook has announced a renewed commitment to keeping reviews on the platform trustworthy with a new Community Feedback Policy prohibiting manipulation, incentives, irrelevant reviews, graphic content, and of course spam, all of which will be policed by a combination of automation and human feedback from Facebook users, the businesses themselves, and of course Facebook’s team

IG is testing a new longform Notes feature with privacy controls: you can set these notes to be visible to the public, close friends, or mutual follows. 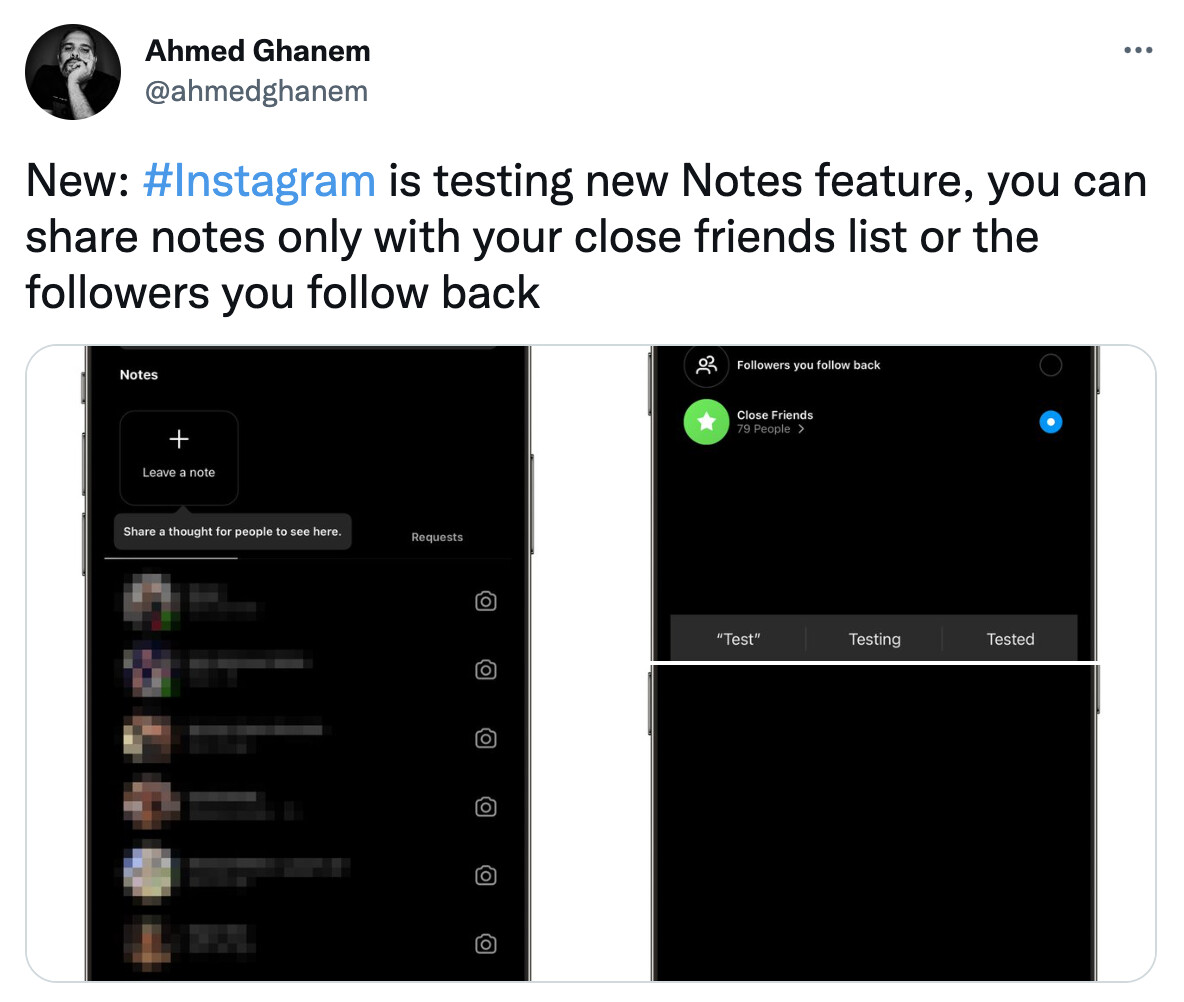 IG is also testing a feature to privately comment on posts via direct message.

Reverse engineer Alessandro Paluzzi has been chronicling IG’s apparent behind-the-scenes work on a Communities feature , and has uncovered plans for what Community profiles and controls will look like. 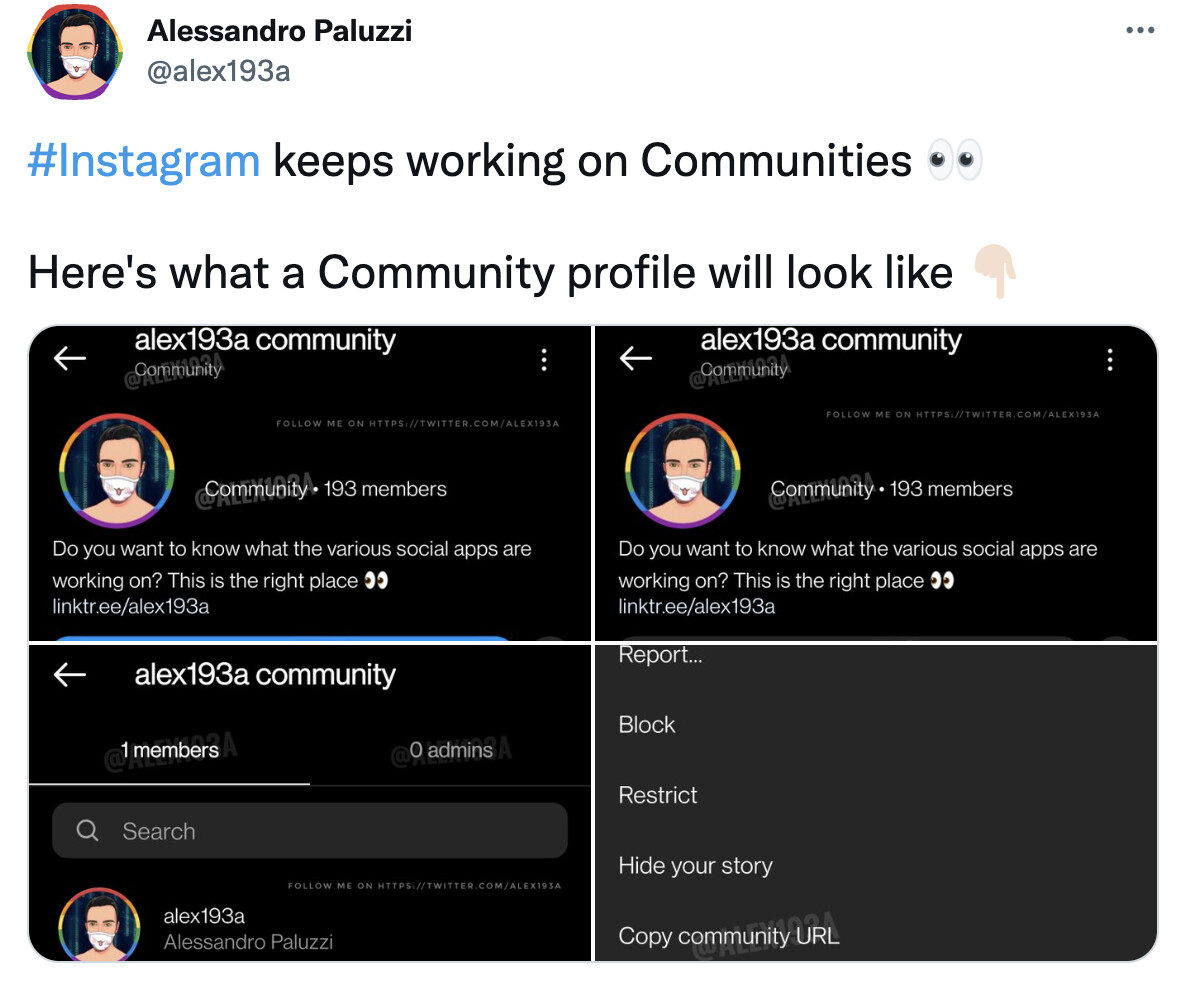 Age verification has long been a concern on Instagram, and in a Reel from Adam Mosseri he announced new verification measures including ID upload, social vouching, and video selfies, in partnership with verification company Yoti. @
📣 Age Verification 📣 To help us provide people with experiences that are appropriate, it’s critical for us to understand people’s ages. Our approach to age verification now includes: - ID upload - Social vouching - Video selfie with @getyoti https://t.co/srrl8U83sd

Much like Instagram, Twitter is also introducing a new Notes feature for longer-form content. Preview “Note Cards” will appear in the newsfeed, allowing users to click over and read the full Note. The feature is rolling out to a small group of users and is not yet available—either to create or to read—in all regions. Notes can contain up to 2,500 words, as opposed to the 280 characters of a Tweet, and are editable. 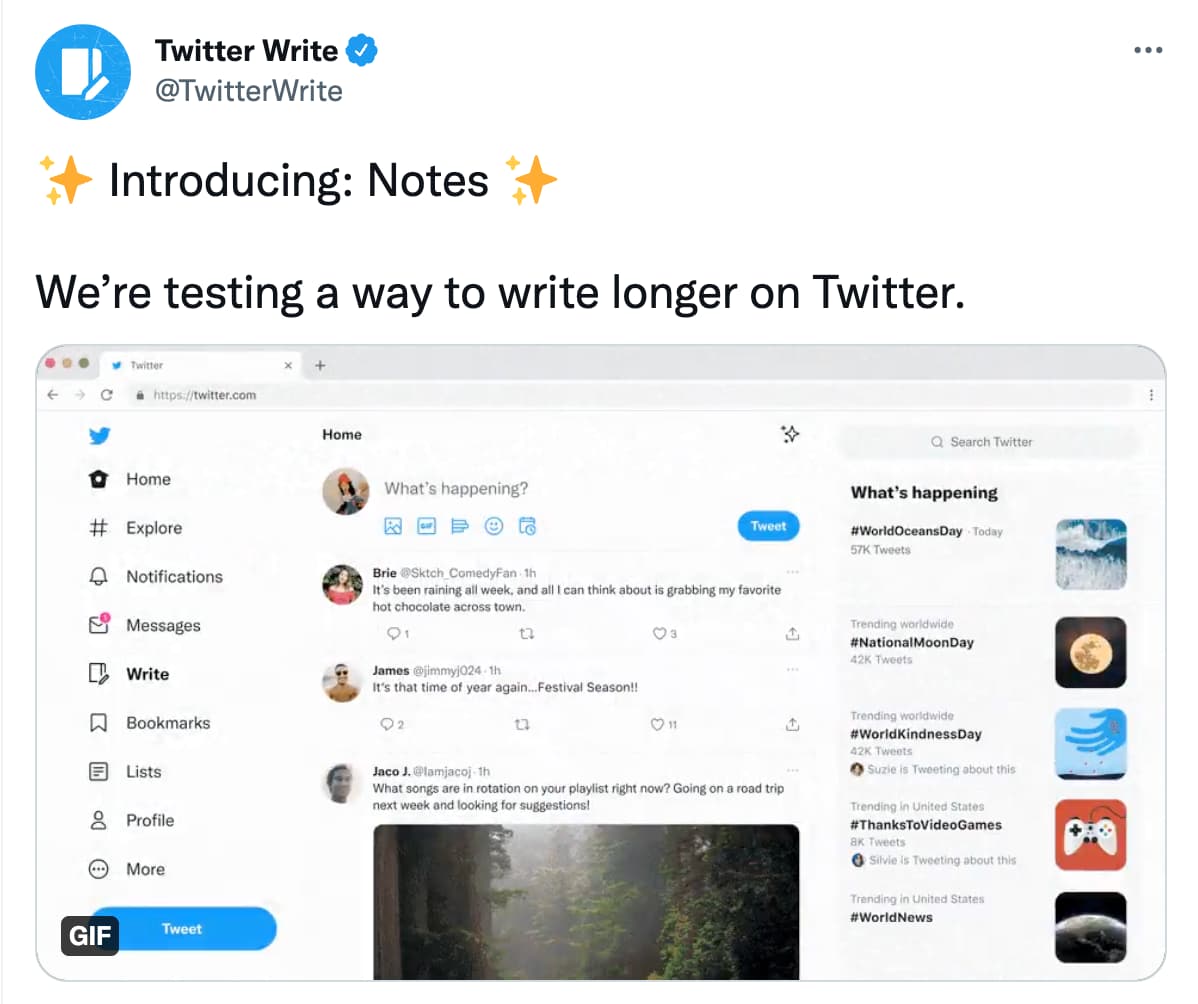 In a step forward for Twitter’s advertising platform, their new Campaign Planner tool will allows advertisers to forecast estimated results before they launch a campaign, including estimating reach, impressions, average frequency, and CPM against a specific audience, campaign duration, frequency setting, and placement. This new feature is rolling out initially to the United States, United Kingdom, and Japan.

If you were one of the developers who attended Twitter’s Chirp developer conference in 2010, good news: it’s coming back this November as part of a renewed push on the part of the platform to improve its relationship with the developer community. The event will take place November 16 in San Francisco. 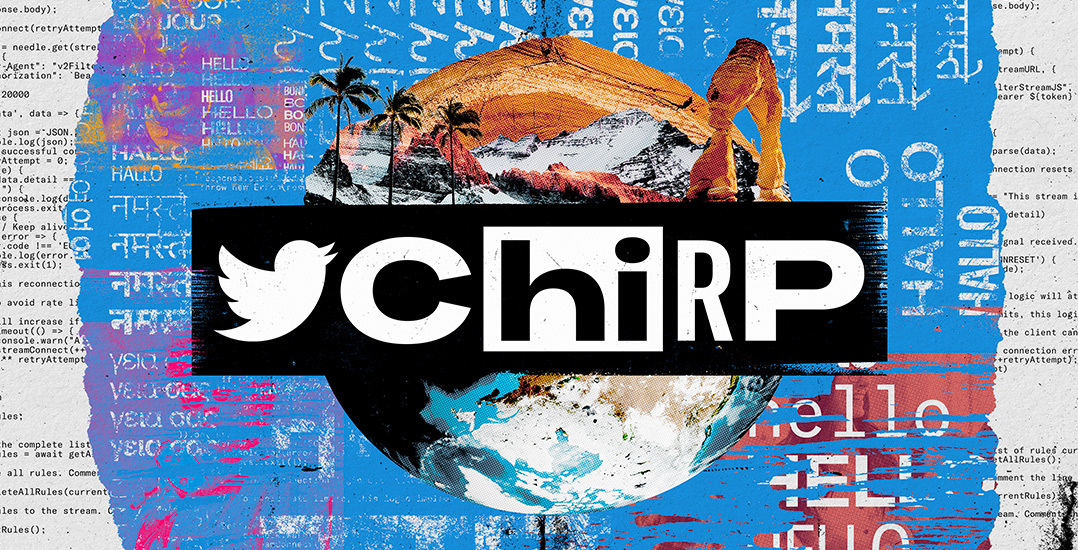 Twitter has expanded its Shopping feature to include all Shopify users.

If you’ve organized a Twitter community and are over it, you can now transfer ownership to another Twitter user.

And in case you’d forgotten about Elon Musk’s $44 billion dollar Twitter offer , it is still moving forward—Twitter’s board unanimously recommended this week that shareholders vote in favor of the deal.

LinkedIn Marketing Labs has added a new certification course on “Content and Creative Design” with units on building an organic presence with LinkedIn pages, creative design for LinkedIn, and building a full-funnel marketing strategy on LinkedIn

Some sensitive TikTok user data has apparently been accessed by China-based employees of parent company ByteDance, including American users’ birthdays and phone numbers, despite TikTok’s repeated assurances that U.S. user data is securely stored on U.S. servers and is inaccessible to China. This news comes from a Buzzfeed leak of dozens of internal TikTok meeting recordings.

TikTok will now adjust its policies on branded content , including advertising and influencer disclosures, to better comply with stricter European Union consumer protection regulations. The revised regulations will also apply to the promotion of riskier categories including alcohol, cigarettes and so-called “get rich quick” schemes.

If your brand is still using Snapchat, good news: converting your account to a Public Profile will now give you a new set of Insights data. 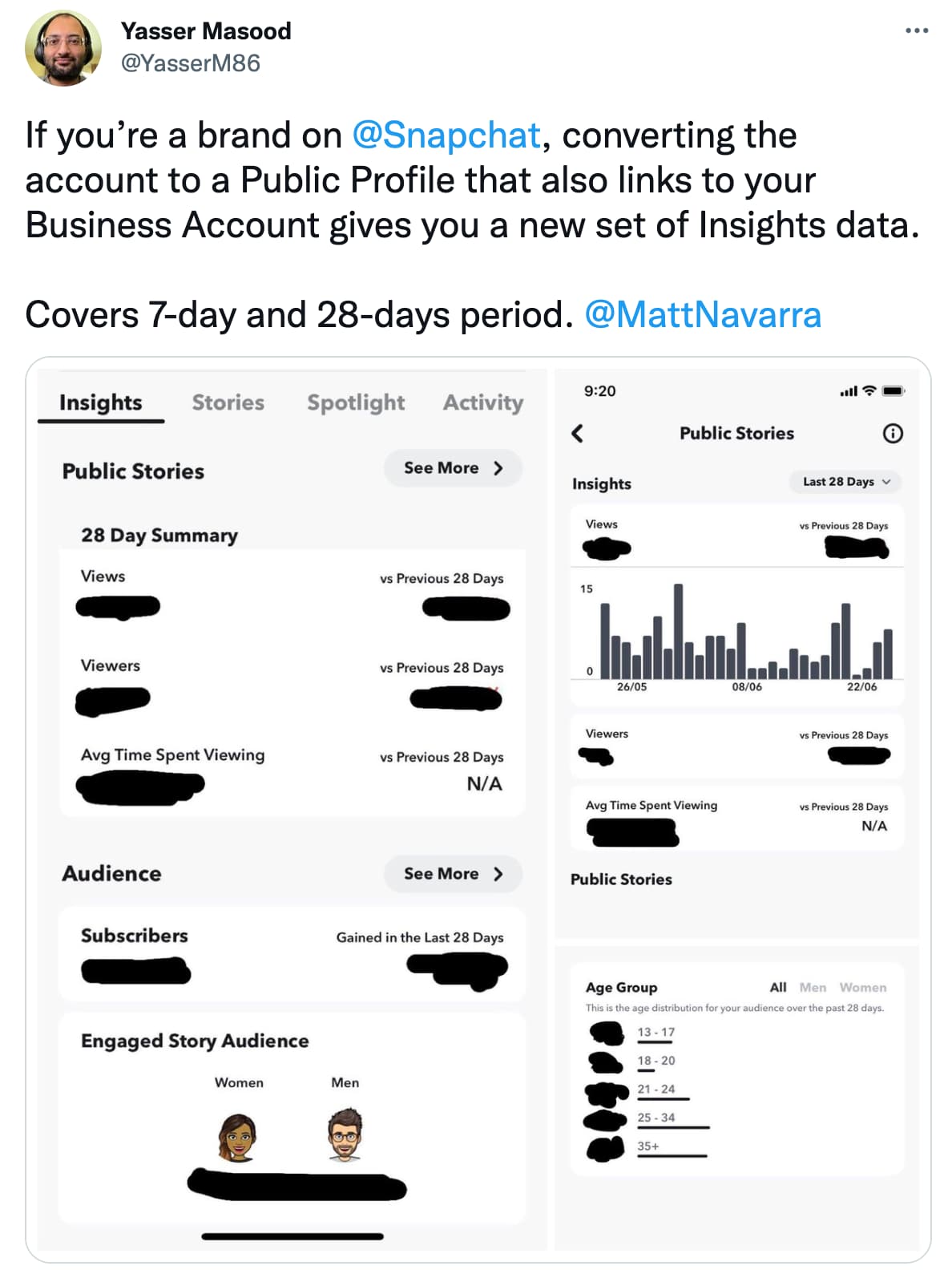 Let’s Chat: Share your thoughts on this week’s news below!

Thanks for the updates - all in one place! super helpful @christine