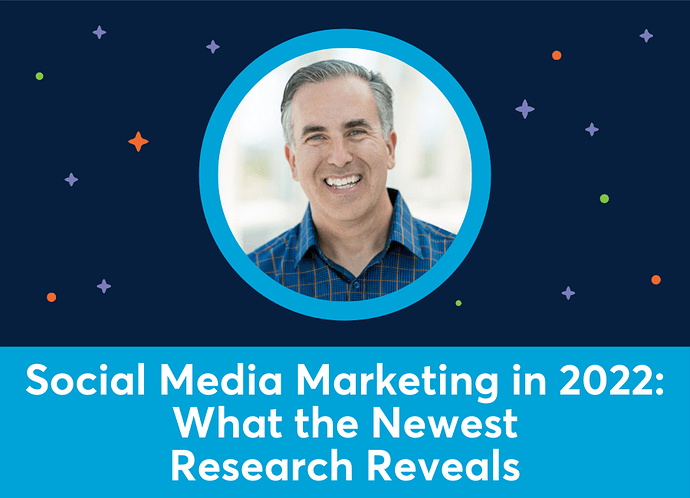 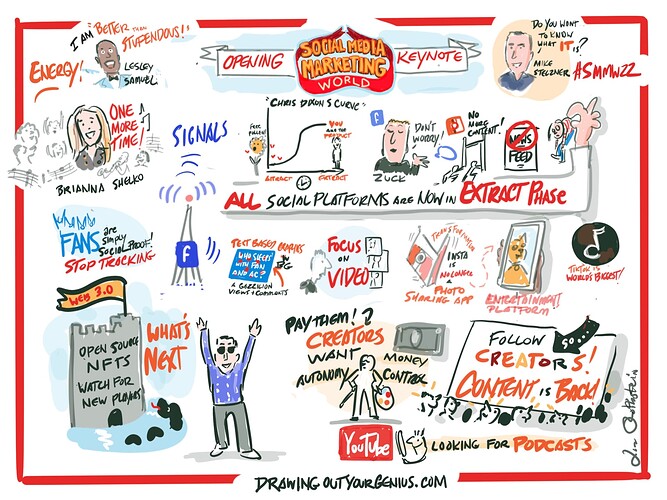 Read our live tweet thread of this keynote address here

Social Media Examiner has been surveying marketers for the past 5 years on the business impact of their social media activities. Those numbers have gone steadily down; just over half of those recently surveyed were confident their social media was positively impacting revenue.

What is going on?

This framework posits that while at the beginning our focus may be on audience attraction, “to continue growing requires extracting value from users and competing with former partners.” The relationship changes from, “Come over here and check out this great thing!” to, “We are going to use you: you are now the product.”

Stelzner walked us through the history of Meta from the launch of “The Facebook” in 2004 through the present day:

A 2006 quote from Mark Zuckerberg elicited chuckles:
“Calm down, breathe. We hear you. We didn’t take away any of your privacy options.”

January 2018 was of course when Mark Zuckerberg moved the goalposts and declared that instead of focusing on content, Facebook would henceforth focus on “Meaningful Social Interaction.”

Many accounts and marketers saw a precipitous drop in traffic. The journalism industry saw massive layoffs due to reduced readership. Facebook has now even dropped the “News” from “Newsfeed”—as of last month, it’s just “Feed.”

Stelzner gave us a bright side to all of this:
If we know where a platform is on the S Curve, we can alter our strategy for maximum gain.

All of the major social platforms are, of course, currently in the “Extract” phase–on point with Stelzner’s “The Matrix” theme, he stated that “all humans are batteries for The Matrix.”

“This is the point in the movie where Neo learns Kung fu,” declared Stelzner. “We’re going to do some dojo training right now to survive inside the metaphorical Matrix.”

In 2018, most marketers surveyed felt Facebook was their number one. Now, it’s only 40%. Prior to 2018, people came to Facebook for content, to learn. In 2018 when Zuckerberg declared that content was no longer important to the platform, he shifted priority to groups and discussions.

We now know that off-platform links and promotional language dampen reach. Fan growth is a dead metric; the truth is, no one goes to your social profile anymore. Fans are simply social proof.

But Facebook does give us signals as to what they will show people, if we know how to read those signs.

Some of the most popular pieces of content were nonsense engagement-bait questions, created natively in the platform with text on Facebook’s fancy backgrounds. Those are the posts getting engagement.

Social Media Examiner decided to do some basic text posts asking their community questions about how they were using social media. Their reach skyrocketed. They also tested including links to blog posts in the comments of those engagement posts, and traffic followed; links in the post body did not do nearly as well.

Another major signal came to us on the day that Facebook announced they had missed their projections and had a record-breaking one-day loss of value. Headlines reported that Zuckerberg told his staff to focus on video.

Social Media Examiner experimented with posting video on Stelzner’s personal profile first, which does not have nearly as large a following as on the company account. Those videos did well. They then re-uploaded the same videos natively 5 days later on the Social Media Examiner page, and they did well there, too. (Simply sharing the video got no exposure.) Natively-uploaded video on Facebook works.

If you have someone on your team with a personal following, Stelzner recommends having them post company videos as themselves first, then a few days later uploading it to your company page as well. 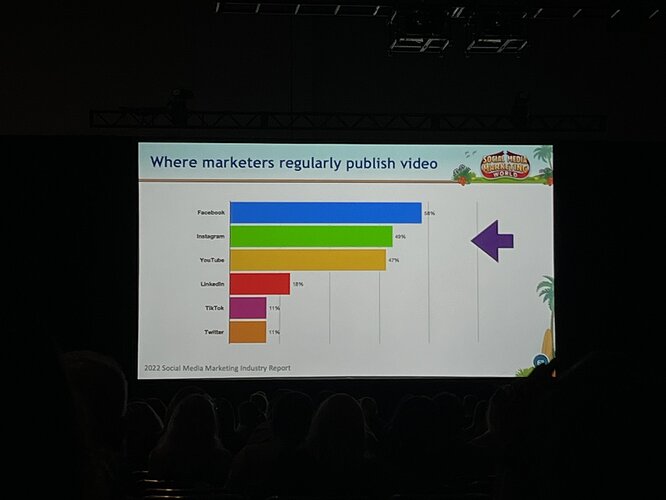 In the midst of the pandemic, Instagram copied their competitor (TikTok) & launched Reels. A short time later, head of Instagram Adam Mosseri declared: “[Instagram is] no longer just a square photo-sharing app.”

68% of marketers surveyed plan to do more with video on Instagram this year–but that number should be higher. Huge changes are coming to Instagram. They’re turning into an entertainment platform; entertaining creators will gain exposure. The good news is that if you are entertaining (or can figure out how to be), Reels are be an exciting exposure opportunity.

The new social media metric:
It’s not about followers.
It’s all about VIEWS.

The algorithms will find an audience that cares about the content you produce—even if they have no idea who you are. Instagram is becoming more like YouTube: they will find your videos an audience.

We as marketers need to pay attention to what’s going on in the world of creators. Everything is moving back to prioritizing content. People want to be entertained; they want to learn.

Many of those journalists who got laid off in 2018 went on to discover services like Substack that allowed them to directly monetize their content as creators. No longer were they at the mercy of big publications. Twitter saw this trend and acquired Revue to lure creators and pay them.

Stelzner then introduced his own “Mike S” Creator Curve:
At the beginning, attention will do.
At a certain point, creators want MONEY. 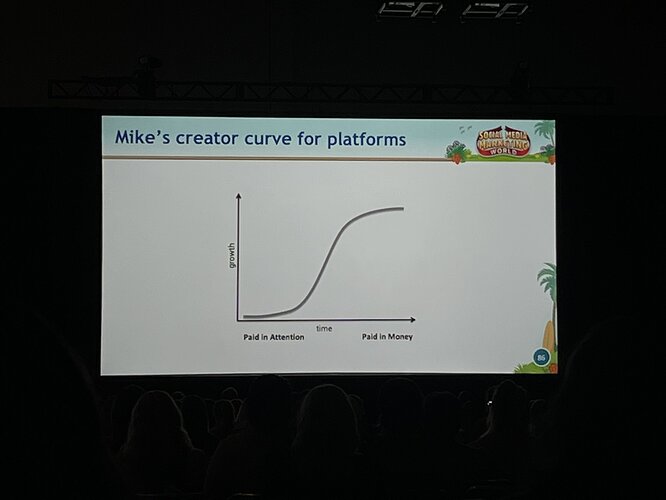 Stelzner warns that the creator economy is coming. Creators want 3 things: Money, Autonomy, and Control. The marketing opportunity at this point is to pay attention to where the creators go: they’re the canary in the coal mine.

Support creators.
Pay them well.
Support them wherever they go.

A 2021 report from Cloudflare declared that TikTok overtook Google as the single most popular website in the world. As marketers, we may not be on TikTok—but our customers are. And so are the creators.

What platform do really big creators love even more than TikTok?

YouTube is the only platform that shares the majority of revenue with their creators. They also go out of their way to find you an audience. And yet only 1 in 14 marketers surveyed by Social Media Examiner said that YouTube was important to them.

YouTube is the primary hub for Social Media Examiner’s live shows. Social Media Examiner has also started publishing video interviews of their podcasts and releasing them on YouTube after learning that a surprising 50% of people surveyed go to YouTube to find podcasts.

Last year, Susan Wojcicki, the CEO of YouTube, declared an intention to help podcasters monetize and grow. Keep in mind that Google owns YouTube–as well as the Android operating system and the Android podcast app. This spells big things for the future of podcasting creators on the platform.

Twitter & Instagram have both announced features to support NFTs, and YouTube’s Chief Product Officer Neal Mohan has said the platform is working on supporting Web3 technology.

With the advent of social media and the birth of the creator economy, we’ve no longer had to rely on traditional media such as newspapers, television, or mailboxes to get the word out about what we’re doing. And now Web3 is going to rock our worlds.

In the world of Web3, there is no S curve. There is no extraction or competition. It’s decentralized & open source. There is no one person (like Mark Zuckberg!) who can change the rules. The users are never the product, and cooperation is at the core of it all.

The Only Constant Is Change

Stelzner predicts that we will see radical change on the major social platforms over the next two years. He urged us to be agile and to try new things. We should watch for new players emerging—and, especially, watch where the creators go, because when the creators go, they will bring the people with them.

This is so nice of you sharing this awesome read and insights. Thank you!

Thank you for sharing, Christine! It’s the next best thing to being there.