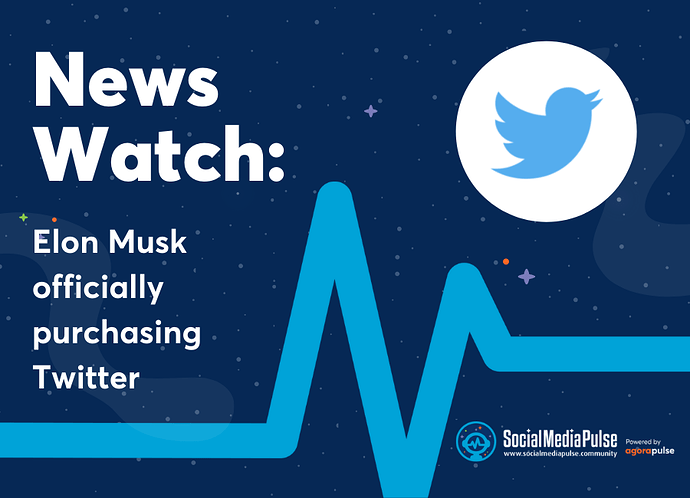 We’ve been watching all the twists and turns—but now, after a week that has included Elon Musk’s tweeted hints about a tender offer, confirmation of $46.5 billion in funding, and a reported Sunday morning meeting of the Twitter board, Bloomberg and other outlets are reporting that Musk’s offer to purchase TWTR has officially been accepted by the Twitter board.

What do you think this news will mean for the future of the platform, both in the short- and long-term?

I don’t doubt that Musk will eventually have Twitter. However, I would be surprised if Twitter gives it up that easily. We are talking about a platform that hasn’t been in the news for a big leadership shift for a bit. I am feeling a little like this is a PR move for both Musk and Twitter.

If Musk takes over the platform, it feels a lot like a power move which I am not a fan of. I feel that Musk has been playing the power card with Twitter for weeks and as a leader that just isn’t right. I mean if this move is truly over “free speech” why wouldn’t he be helping push better digital policy and legislation on it rather than just wanting to take it over.

While I am not a fan of Musk taking the platform over, I don’t see it truly impacting the overall user ability of the app.

I agree; if he wants to make it better, work on making it better, not on taking it over. If he truly believes he can do it better, why not start his own thing? (Because it wouldn’t work, that’s why!)

There’s also pending legislation in Europe over requiring platforms to take even MORE responsibility over how those platforms are used/abused, which does not bode well for Musk’s stated priorities…

So … for those of you who love Twitter, where will you go if Elon breaks it for you?

My thoughts. I’ve been on Twitter since Dec. 2008. Yeah. So - I think in the short term nothing will change. Even right now the train that is Twitter is just chugging along almost oblivious to this news. If he can fix some of the technical challenges then I think this will be good. As far as a social media manager - doing the work - day to day - nothing is going to change for quite a while. In the long term, I hope it is better. Even if the only thing that changes is he gets rid of the bots (then he needs to fix this on Youtube) I am a fan of Elon and I have a Tesla on order - full disclosure. If he (with his brilliant team of scientists) can build a ship that will go to Mars, I think he can fix Twitter.

Ahhhhhh…I truly don’t know…maybe LinkedIn? I love the conversations on Twitter. Maybe I’ll get more into FB Groups, I don’t know.
Maybe I’ll just hang out wherever my favorite Twitter people start hanging out.
I’ll honestly probably just stay on Twitter, but I fear my well-curated Twitter experience (friendly, supportive, not a dumpster fire) may be in danger. Might have to start using my Lists better.

…but don’t bots deserve “free speech” too? Who gets to decide which bots are valuable and which bots are just spammy?
(This is just making fun of his discourse thus far—I do think getting rid of bots is good, I just worry he’ll roll back some of the moderation that has made the platform less abusive.)

Someone pointed out to me that those that want to circumnavigate regional legislation can just use a VPN. Personally I don’t think people will be bothered enough to do that.

(Present company accepted - because I’m enjoying the responses here) I feel like social media managers/experts need to be more imaginative in their response to this news. Trotting out the usual ‘oh, you shouldn’t build your business on rented ground’ yada yada doesn’t really add anything to the debate about the news and kind of shows a lack of expertise in giving advice IMO. I mean, obviously that’s true, but it doesn’t help clients we’re working for/representing.

What are the opportunities that the acquisition brings?
Is there opportunity in branching out of social media to other channels for a client/brand?
At what point do you make any strategic decisions?

I think lists are going to be a FANTASTIC solution to any changes to your feed. Great idea!

I keyed in on his “authenticating all humans” line, which, to me, hinted at A) making Twitter a kind of ubiquitous SSO for the average person; AND B) a possible end to burners – one Twitter account, one person, fully authenticated (name, address, the works – digital passport).

And maybe I’m reading a bit too much into those three words, but de-anonymizing Twitter could have potential to significantly dial back bad acting.

If everyone has to own everything they say on Twitter, how toxic is that future?

Certainly, a huge number of people will behave badly and own it happily, but I wonder what percentage of the bile and vitriol on Twitter snowballs due users’ ability to function anonymously, en masse?

I wonder if LinkedIn groups will make a surge? LinkedIn seems to have big plans to roll out competitive features like audio. Since groups already exist, maybe they’ll get a jumpstart?!