🎥 How Do You Decide How Big To Grow Your Agency? (Agency Summit) 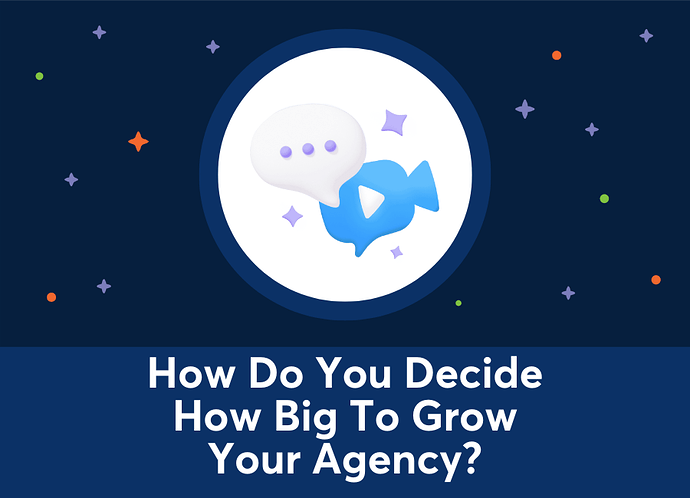 We asked some speakers from this year’s Agorapulse Agency Summit their thoughts on how to decide what the right size is for an agency.

See the video below for one set of answers, and keep reading to find out what Bryan Kramer, Jonathan Jacobs, Jason Swenk, and Alex Dumas each had to say on the matter.

Then, tell us below:
Does your agency have a specific eventual size in mind—or are you just focused on growth at the moment? 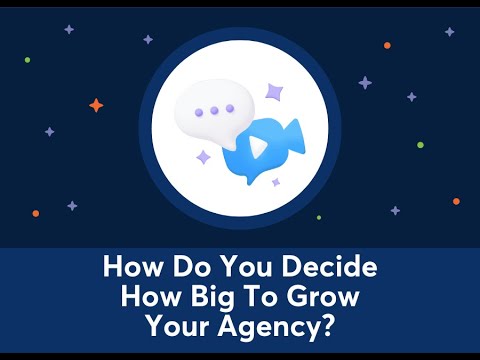 When agencies start to grow, they get to a point where you can be a boutique agency, you can get to a mid-size agency, or you can become a larger agency. It depends on what you want to accomplish, how you want to grow your firm, and what level of skill, ability, or even competitiveness that you want out of your agency.

The biggest thing is: what do you want to take on?

So the question comes back to: what kind of life are you looking for? And are you willing to go through those speed bumps as you climb each of those mountains, to get to the point where you can you can be where you want to be? What’s your vision?

So for me, we were really enjoying that ten-person group, that ten-person structure, because we were nimble. We were competitive. We were in a pricing place where everything was fun and and we could get into accounts that we could serve and have with purpose. Those are the kind of size companies that I love working with, for, and leading.

However, that could be different for you. So everyone’s different.

Our company originally then grew to 30 people, and I would say, go back to the ten person company! Because that’s what helped me and our vision in our life, in our balance, and what we wanted to be at and grow. So that’s where I’d be.

I think that’s a really interesting question. And as someone who ran an agency for ten years, that’s always something we were thinking about.

I think the first thing to really remember is that bigger isn’t necessarily always better.

It’s really important to have an intention at the outset of creating your agency for what type of agency you’re trying to become: do you want to be a big agency, do you want to be a small agency, or do you want to be somewhere in the middle? Because that foundation you set from day one is going to influence what type of agency you’re going to become. The processes that you put in place might make sense for a small team, but if you end up having to grow to a certain size, there’s going to be even more growing pains because you were building for something different.

You also have to answer that question of how do you want to function to set the stage for that growth? There are a couple of concepts to worry about. Do you want to rely on a freelancer model, or do you want to rely on running projects with a more typical agency hierarchy? Or you want to do a pod-based system where you’ve got a group of, let’s say, a designer, a community manager, a copywriter, a strategist on a project, and they each take a chunk of projects—or do you have it more department-based? So, really figuring out how you’re going to staff as you grow in that way is key.

I would say as we were growing, no matter what size we were thinking about being, the biggest thing that we always looked at was time tracking. That was just key for us to figure out our bandwidth and our capacity. And the never-ending fight I had as an agency owner, as a manager, was getting people to reliably time-track. We used Harvest for that, and I would say from day one of implementing that—which was maybe in year three of our agency—to year ten when we sold it, was a never ending fight. It was always hard, but it was the best way we had to really be able to answer that question of, “Is it time for us to grow? Is it time for us to hire?”

But I think this is such an important question, and I think that’s what a lot of agencies face. And what we’ve all come to realize is that we’re always either overstaffed or understaffed; it’s very rare that we’re hitting that sweet spot there.

I think it’s different for everybody, right?

You have to figure out: what’s the end goal?

I always look at kind of the end result, and then work backwards from there, because reaching a summit of the top of the mountain is very different for everybody.

The first thing that comes to my mind is going all in on their people.

What that means to me is putting people in the right position—because like you said, bigger isn’t necessarily better. But we want to put the best people, better people—not in a judgment way, but the people who are most effective at what they do and can bring their talents to light in the right positions. And that, in my experience, has organically created the growth that most people are looking to see.

It’s a process of really slowing down in order to speed up, and to move faster, and to generate more of what they want. And that really just comes from a place of evaluating your people, communicating with them, and being conscious and clear about where you want your agency to grow and what that can look like.

I’m all about humans first—human connection first. That’s the name of the game of my business, and other businesses that I work with, is going all in with your people: really pour into them, help develop them personally, professionally, and you’ll see some great return on that.

What size do you think would make you happiest as an agency owner?

This is invaluable information for those of us wanting to build an agency and for those who don’t.