Getting Your TikToks Seen (Wave Wyld) 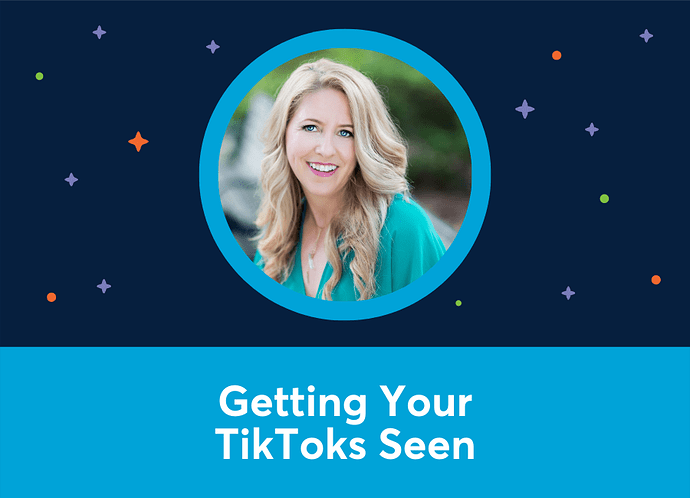 There are a lot of different strategies to getting more views on TikTok.

But first, there’s one thing I like to make really clear.

I feel like people on TikTok can get really overwhelmed and caught up in the strategies, and it stresses them out. I hear from clients all the time, “What time do I post? Which sound should I be using? Which trends should I do? Which hashtag should I use?”

And I say to everyone:
Remember that these are strategies that can help improve and boost your views, but they’re not that measurable. We don’t know how much each thing is making a difference.

I know that’s cliche to say, but whatever you’re communicating in your videos, how you make people feel, the story that you’re telling, and how people resonate with that and engage with that and watch those videos is the best determinant of video performance.

All these strategies are good to implement, but don’t get too hung up on them.

Ultimately, watch time and engagement are the name of the game, which is very familiar to all social media. Essentially, how that algorithm works is that they test your content with how other users engage with it and watch it. So if it gets lots of watch time and engagement—likes, comments, shares and saves—then it’s shown to more people in wider geographic areas. The more views your videos get, the more chance you have to convert those viewers to followers, which is how you build an audience on TikTok.

One of the most important ways to get more views is what we call the “hook.”

I define a hook on TikTok or short-form video content as something you say or do in the first three seconds of the video to grab attention. If you can get people to stop scrolling with your hook, then you have a good chance of getting them to watch more of the video.

When you go to YouTube, every video has a title that’s meant to grab your attention and tell you what the video is about. It’s the same for TikTok videos. Essentially, title hooks are copywriting; you can use lots of copywriting tips, if you’re familiar with any of those, to create your title hooks. It’s the thing that you say at the beginning of the video. I highly recommend that you say it and you also put it in text, as it has more impact at the beginning of your video.

Educational videos often use a title hook—and most business owners are primarily going to be making educational videos, especially if you’re a service-based business, because we all know that positions you as the authority figure, the expert, and helps to build trust.

An example of a title hook for me might be something like, “Three Mistakes You’re Making In Your TikTok Bio.” Nobody wants to make mistakes; it’s going to grab their attention. And it’s telling the viewer what the video is about.

Some other different types of hooks are things like camera, subject movement, verbal, and music hooks. Some of those are used more for entertainment accounts, but I would say that the most common ones for business owners are the title hooks and things like camera movement in the first few seconds.

You can combine hooks, too; you don’t have to use just one hook. So that is the number one way to get more views.

When you ask questions, leave them open-ended: you want to invite an opinion or an experience, just like other calls to action on social media. If you ask someone, “Do you agree?” there’s not a lot of incentive for those yes or no questions.

Calls to action are very powerful on TikTok. There’s a lot of different types of calls to action, and there are different ways you can use them. Experiment and figure out what works for you.

If you really want to get more engagement, then use what I call “engagement-based” calls to action. That could be saying, “Like this if you agree,” or, “Share this with a friend”—it’s pretty straightforward.

One phrase that TikTok doesn’t like is “Link In Bio.”

There is proof—I see it all the time—that if you type the words “link in bio” in your comment section, TikTok suppresses that comment. It appears for you, but if you go and look at your account from another account, you will see that your comment does not show up.

It also happens with websites. I had a client the other day who was selling products. Someone asked where they could get them, and she typed out her website in the comment. I was looking through her comments and she said, “Check it out here,” and then there was nothing. I sent her a screenshot and I said, “I think you typed a website here and it doesn’t show up,” and she said it showed up on her end! So they don’t like you to type out a website. (There are some good reasons for that, because there were issues with spammers and porn sites and that kind of stuff. They don’t want that to be in the comments.)

The workaround for the “Link In Bio” is if you are typing it in the comments—and you’ll see this a lot—people misspell “link in bio" in all sorts of ways, like “Lynk In Byo,” “Linkin mai Byoo,” etc.

I do see viral videos that say, “Link In Bio,” in the caption, but they are coming from big creators. So you have to be careful with those “Link In Bio” calls to action, which of course are very important for business owners because we want to drive traffic to that website link.

Another tip to get more views is to keep your videos visually interesting and dynamic.

If you make talking head videos—and, again, a lot of educational content creators do—it’s really going to be helpful if you can use green screen effects. Anytime you can show a visual of something that you’re explaining or teaching is going to help keep it more dynamic and help it look more native to the platform.

Using text on screen also is going to help keep people interested in watching, especially if they’re following along with what you’re saying and reading text. And if it’s educational, people can absorb that information more.

The only thing is you don’t want to get too crazy and make it too cluttered because there’s a lot of interface on the screen. So if you’ve got stickers and texts and all that kind of stuff, it can be kind of off-putting.

Think about your editing. It’s a fast-paced, dynamic app; typically, in a lot of videos, especially if there’s talking, you’ll be cutting up your sentences.

I do this in all of my videos. I say a sentence, I cut it up. It’s not very common or as effective to just have one video clip of just talking for 30 seconds. It helps keep it short and to the point to cut up your sentences.

Try changing your position a little bit in each segment; sometimes I sit a little bit closer to the camera, and then I move back in the next shot. That’s very common as well. Sometimes people are walking and talking—I call it “the walk-and-talk”—instead of just being so static.

There are lots of different ways that you can create TikTok videos. Experiment with different formats.

Some of the more common ones, like I said, are talking heads. The next one I call “music and text with B-roll.” These are really great. If you don’t have a lot of time, you can batch these: you’re just shooting, it’s not so much about the dancing and pointing anymore. That’s very much over. Now it’s all about the B-roll. Take a ten-second clip of you making your coffee, cuddling with your dog on the couch, sitting at your computer typing, sitting and journaling, reading a book, that kind of thing. Think about what you would do for brand photos. Do that on video, in 10-second clips, and then put text over on top, which could be educational, inspirational, or just a message that you’re communicating.

Other ways to make videos are tutorials, like a voiceover with multiple video clips. Of course there’s duets and stitches; try experimenting with those features on the app. There’s POV (point of view) videos; that’s another way that you can communicate information. Experiment with lots of different video types and find what works best for you.

Have you gotten good reach on any of your TikToks?