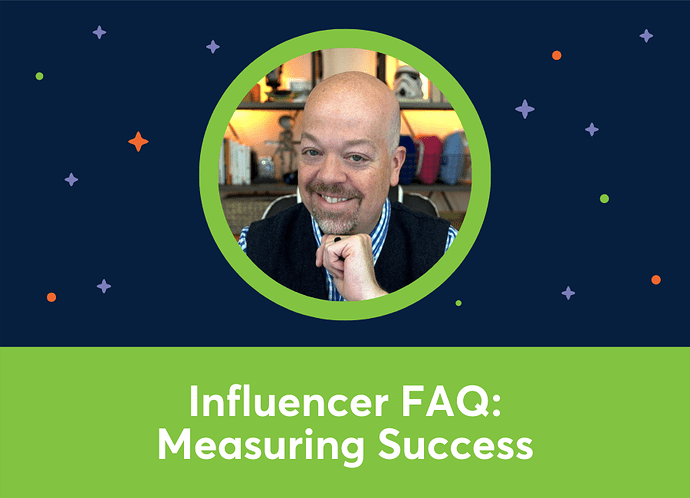 Influencer marketing expert Mike Allton discusses how to assess the success of an influencer relationship.

Measuring success will change a little bit depending on the campaign.

For instance, I might want influencers to tweet about my brand. There are other kinds of campaigns where I might be working with an influencer to create content to get us in front of their audience in some way.

Think about in advance, “What can I measure? What’s important to me? What is the goal that I’m trying to accomplish?”

That goal determination should take place before you figure out what the campaign itself looks like. You don’t want to think that a particular campaign is going to generate sales after you’ve already figured out what the campaign is, because it might not be the kind of campaign that will generate sales. If that’s the goal, you’re going to want to go into it with that understanding in mind and come up with very specific activities where there’s a reasonable expectation that the result will be delivered.

That’s another consideration: what is a reasonable expectation?

If I’m working with an influencer and they have 10,000 followers on Twitter, I can’t expect them to tweet once and generate a hundred sales. Mathematically, statistically, that’s an unreasonable expectation. Instead, if 100 sales is the goal, I’d want to sit down with that influencer and figure out what we can do together, what it looks like to be able to generate enough buyers, enough traffic, enough interest to actually create that kind of a metric.

Measuring success will vary from influencer to influencer and from campaign to campaign. The best advice I can give you, other than everything I just said, is to make sure that you’re taking the time to determine what those measurements might be and how you’re going to measure them.

Is it traffic? OK; let’s make sure we have tracking links at every stage of every piece of that particular campaign, that we know through UTM parameters and shortened links and affiliate links and so on exactly what this person is doing.

If it’s not something tangible like that, well, then we might have to think a little bit outside the box.

Spend time up front having frank, honest conversations, co-participant conversations with the influencer and with other stakeholders in your organization. Give yourself a little bit of room to think creatively about what you can and can’t do, and to maybe go out and find some other solutions.

For instance, if you’re doing a series of four video presentations and you want to track how engaged your audience remains over time—you want people sticking around for that third or fourth video—a Facebook Live series probably wouldn’t be a very good solution because you won’t necessarily have insight into how many viewers on videos two and three were there for video one. So you might want to consider an alternate platform, a tool that can actually support you in your goals.

Influencer Marketing Measurement Guidelines from The Association of National Advertisers

Mike Allton @mike.allton
Mike is an award-winning blogger, speaker, and author at The Social Media Hat, and Head of Strategic Partnerships at Agorapulse where he strengthens relationships with influencers and brand partners.

How do you measure your partner campaigns?

I measure like you - starting with a clear goal @mike.allton You lay it out nicely here, isn’t it crazy to know so many (BIG!) brands do not even use tracking (UTM) links??!!