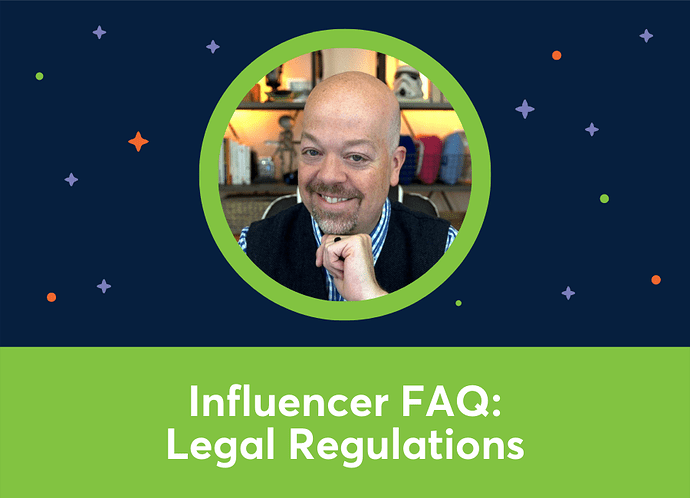 So let me uncomplicate it for you.

If you are a brand located in a specific region and you are working globally, with influencers, what I want you to do is focus on the regulations in your specific country.

It’s not that the other countries don’t matter, but if one of my influencers in Malaysia isn’t following Malaysian guidelines—I don’t know why I’m picking on Malaysia, I just picked one—the Malaysian government isn’t necessarily going to come to me as the brand. They’re going to go to that influencer.

So I do try to make my influencers that I’m working with understand that it’s part of their responsibility to make sure that they’re adhering to those regulations.

The other good rule of thumb, though, is once you have your own understanding of what your country’s regulations are, apply those across the board. So if it’s a requirement that your influencers need to use the hashtags #Sponsored or #Ad on a paid tweet, ask all of your influencers to do that, so that it’s consistent across the board. Provide that documentation so that it’s very easy for everybody to understand. And then encourage them, like I said, to go to their own unique areas and research that.

Now, that’s if you’re in a situation where you’re working globally and you do have a lot of influencers around the world in a lot of different countries, so much so that it’s just not reasonable to expect that you would have the time to research 250 different countries and their unique guidelines on influencer marketing.

If your brand is located in one country and you have influencers in one other country—like if you’re based in the United States, and you also happen to have some influencers who are in Canada—I would take that extra time to research Canadian influencer marketing regulations and be just as familiar with that as I am my own country, because it’s just one more set of regulations to go by and they’re probably very similar to what you’re already used to.

But otherwise, I would work with the individual influencers and encourage them to be mindful of their own area’s regulations.

Mike Allton @mike.allton
Mike is an award-winning blogger, speaker, and author at The Social Media Hat, and Head of Strategic Partnerships at Agorapulse where he strengthens relationships with influencers and brand partners.

Do you work with influencers in other regions?