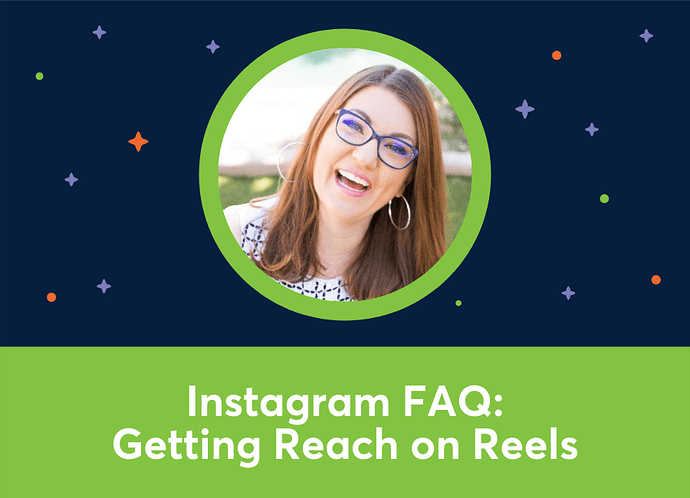 It’s one thing to create a reel; it’s another thing to get people to actually see your reel.

How do you get that reel in front of more people?

Some things to keep in mind:

You can customize your cover image; it doesn’t have to be a frame from the video.

On your cover image, have text that speaks to what is happening in that video. When people are scrolling through an Explore page, they’re just seeing all the thumbnails. If there’s no context to what that video is about, why would they watch it? They’re just scrolling mindlessly. But if you have that text that tells them what is in the video, they go, “Oh, that’s what I want to see. That’s what I want to know.” They’re more likely to click through and watch it.

Get to the point

Super fast, hard-hitting, to the point, literally in the first second of the video.

Do not come in with, “Hi, I’m Jenn Herman and I talk about Instagram…” Boom, bye—we are gone! They are not going to wait.

Come in right off the bat with, “Hey, we’re going to talk about Instagram reels and how they work for you.” Get that attention and stick with it.

Come in hard and fast, immediately capture their attention.

Shorter videos tend to do better for capturing new audiences.

Reels of 30-60 seconds—and they’re currently testing 90 seconds—those longer ones are great for your existing audience. But if you want to attract a new audience, consider more of the 15 second—or even less, maybe even a ten second video, at most 30 seconds.

Those new users aren’t used to your content, and they’re more likely to be finding you in a search where they’re in a scroll mentality. So we want to capture them short and sweet.

Check out more of Jenn’s tips for making better reels

Have you gotten good reach on your Reels?

What kinds of Reels seem to get the most views?

Thanks for the three tips @jenn
So simple yet… I just need to create more reels. (and I will take your advice into consideration!)

One thing that drives me insane is that when I do a nonsense Reel just for fun, that’s the ones that hit—my reels that actually connect to my brand don’t get nearly enough love!
(Must work on that…)

Yes, I’ve had two like that. Nonsense (my dogs and a waterfall) that did so well. Go figure!

Yeah, that tends to happen because the “fun” ones get into more shared distribution as it’s the entertainment content that most people are consuming. But chances are none of them are really your target audience anyways. I’m experimenting more with mixing in the random topics with my business Reels but, like everything else, I tend to be an exception to the rule lol