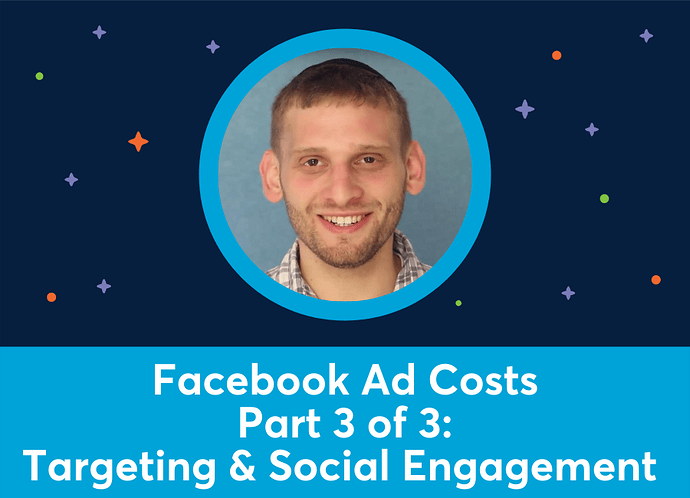 For this series, Christine Gritmon interviewed Facebook Ads expert Azriel Ratz about the factors that determine Facebook ad prices. Part 1, Part 2, and this piece were written from those interviews.

An important factor in how your ad will perform is the person seeing the ad. Obviously, this is something you do have control of. If you’re running ads to an audience, and your costs are too high, it could be as simple as changing your audience to get costs to drop.

There are so many ways to target different users on Facebook, anything from your email subscribers, your website visitors, people who have engaged with your Facebook or Instagram page, people who have watched a specific amount of your videos–all of these are targetable audiences that could result in lower costs because Facebook knows they are people who have chosen to engage with you and your content.

If a person doesn’t know how to ride bicycles, but loves roller skates, and you show them a dozen ads about bicycles, that’s not going to get them to click, no matter how amazing the ads are. So if you’re seeing high costs, you want to ask, “Am I targeting the best person I can target with these ads? Is this the type of person who would want to engage with this ad? And is there someone I’m not targeting that I could be?” Whether that’s a warm audience like an email subscriber, a lookalike audience, or a cold audience based on interests or demographics.

What ad does this person want to see?

When you are trying to compete against a thousand other advertisers, Facebook is going to choose the ad they think this specific person wants to see the most. And if you are not the one that they want to see the most, you will pay extra money for that impression, because it’s lowering the overall quality of their user experience.

Let’s say that Facebook knows a person is interested in bicycles. Facebook knows that this person engages with posts that have the word “bike” or “bicycle” in them. Facebook is reading the text of your post for certain keywords: when showing ads to a person, if they actually care about those keywords, Facebook is going to charge you less money to show your ad to that person.

A couple of years ago, I actually had this crazy setup where I would create 12 versions of a single ad to have the words mixed up in each placement of the ad. I would test the word “bicycle” in each of the three placements for the text, and then I would hope that Facebook would choose the right one based on how users were engaging. I could basically guarantee that if I tested every version of it, I would end up getting the lowest possible cost per impression. I used to create around 200+ ads in a single campaign and ran them all against each other in order to find the best word in the right spot.

This shows how much Facebook cares about the user getting an ad they want. The better job you can do to reach the right person, the more likely Facebook will want to show that ad to that user and give you a lower price for it.

If you have a post and it has a crazy high CTR (click-through rate), then Facebook’s going to reward that high CTR with a lower cost for impressions. They’re seeing that people are super engaged with that post: “Users like this; we should show this to more users. It’s a better user experience. Let’s show it to more people for a lower price.”

That same thing is true with any sort of engagement. If a post has a lot of engagement, Facebook reads that as, “People like engaging with this; let’s show it to more people, because more people will engage with it and it will be good for the users.”

Because of that, I’ve started actually using more organic posts as ads than posts created in Ad Manager. If I can show up, on dollar one of ad spend, with a post that has already proven to do well with the audience, my hope is that Facebook’s going to say they already know that this ad’s going to do well. It already did do well organically. It already potentially has comments, likes, and shares. Facebook will usually give this ad a lower cost per impression because they already know that this post is engaging and provides a good user experience.

Social engagement–or any engagement–is something you can control. You can actively take your ad and target it towards people you already know are going to comment. Let’s say you were to target people who purchased your product between 10 and 30 days ago, and created a post that said, “Tell us how much you love this product.” They could comment on this post with all the love they have for this product that they just bought. They could talk about how great it is; they could post pictures in the comments. And now you can take that very same post with all these amazing comments from your purchasers and run that as an ad to new people.

A new person doesn’t know who you are. All of a sudden they start seeing all these comments from people about how much they love this thing that they bought. That is a way to leverage Facebook ads in order to create a post that already has comments, likes, and shares. And then you can use that post as an ad with potentially the lowest cost per impression, because Facebook already knows the post is going to do well, because it already did well. It has that social proof.

That is one major factor in the cost per impression that you can actively change right now, and is why I focus more now with clients on running existing posts on their pages as ads versus creating new paid posts in Ads Manager. Even though I might not have the perfect wording and the exact right image, if I tested a hundred versions in Ads Manager, the fact that people have already shown interest and engagement in that post means that I can leverage it. And Facebook can trust that it’s a post that will do well as an ad.

Check out the previous articles in this series: