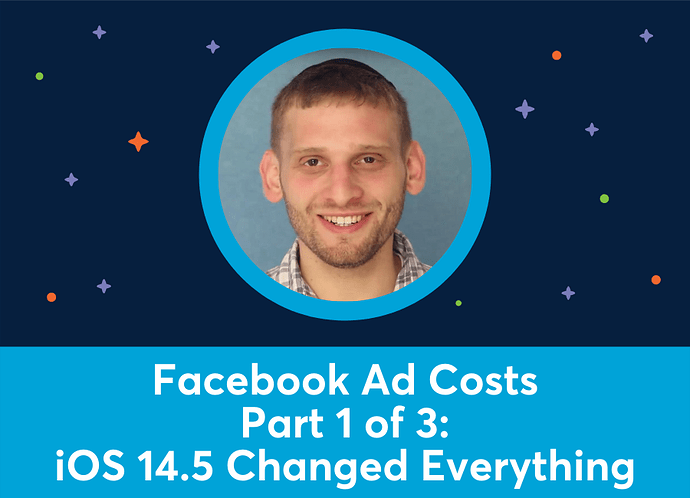 For this series, Christine Gritmon interviewed Facebook Ads expert Azriel Ratz about the factors that determine Facebook ad prices. This piece, Part 2, and Part 3 were written from those interviews.

In April of 2021, Apple launched iOS 14.5, which gave people the ability to opt out of tracking from third-party trackers. Since then, about 80% of all iOS users have opted to disallow tracking on most apps on the App Store. Additionally, Google has announced that they’re planning to do the very same thing on Android devices as well as removing tracking cookies on Chrome, which is the number one most used browser. This all means that Facebook and other advertisers will not have the same amount of data that they’re used to relying on in order to scale and optimize ad campaigns.

Now, Facebook must rely more on first party user data. They can no longer properly track if people are going through a business’s site or if they’re purchasing because they don’t have that data to leverage anymore. Facebook’s going to have to rely more on what’s happening on Facebook than on what they could before: seeing the entire pixel journey of a user, where they could still tell if a person made a purchase even though they didn’t engage with a post.

The fact is, the equation has changed.

Facebook removed the 28-day conversion window in January 2021 because they couldn’t share that level of data anymore. Right off the bat, these changes led to most businesses losing 20-30% of their ROAS (return on ad spend) data without it meaning anything, meaning that people were used to seeing a certain number on the back end–perhaps a 5x return on ad spend–based on the 28-day click/one-day view window, and now it’s only based on a seven-day click/one-day view window.

What These Attribution Numbers Mean
If Facebook said that you make a hundred dollars from ads in the last week, it’s likely that you’re missing a percentage of revenue that was made somewhere else. If your attribution is off by 25%, that means that for every hundred dollars, there’s another $25 that wasn’t counted; that money was made, but it’s not showing up in Facebook.
Back in June, July, August, Facebook was down 40-something percent for businesses that were mostly targeting iOS devices. That meant that for every hundred dollars Facebook reported, businesses were really making somewhere near $145. For many businesses, this was enough to turn off their Facebook ads; they felt they weren’t working anymore, and that it was time to find somewhere else to go. But this was wrong. Facebook Ads were not the problem. The problem was attribution.

On top of the fact that attribution is horribly down, Facebook as a business is also taking on this privacy responsibility in a bigger way. Just this month (March 2022), they removed a whole slew of targeting options that had previously existed. Until now there were interest-based targeting options that relied on things that people felt might be too private; religious interests, for example.

So, 80% of users have already opted out of tracking based on website engagement. And now Facebook has removed thousands of targeting options because of the same concern: that users want privacy.

What that leads us to is two sides of the same coin: on the one side, we need to rely on Facebook to do the best they can as far as optimizing; on the other side, we have to do the best we can as advertisers to be able to say, “This is actually working as well or better than it was,” before we keep pushing money into campaigns.

The Sky Is Not Falling

I had a client back in June of 2021. We all thought that the sky was falling: the pandemic seemed to be “over,” people were going back to work, businesses were reopening, so all the amazing numbers we were used to seeing while everyone was sitting at home scrolling through Instagram all day were gone forever. For a business that was used to seeing a five, six times return on ad spend, all of a sudden they were looking at Facebook and seeing a three and a half return, then freaking out like this was the end and they were going out of business. It took me until about September to find out that not only was that not true, but the business was making more money, dollar for dollar, we just could not properly track it!

I created a spreadsheet where I took how much money, month by month, the business had made for the whole previous calendar year, versus what Facebook said they had made. Let’s just say that Facebook had accounted for 10% of the business’s total revenue–but all of a sudden in June, it only accounted for 6.5% of the total revenue. Now, if your business had started new things–they started running ads on Pinterest and TikTok, doing more organic on whatever platform, running more email marketing, doing magazines–then it would make sense that there would be money coming in from other places. But if your business is doing the very same things they were doing a year ago, and all of a sudden they’re making just as much money, but spending less than they were before, the reason is not because the ads are doing worse, but because the attribution is less reliable.

We now need to cover the other side. What we found was that the drop in attribution for almost all my clients was between 41-44%. Facebook’s number was 15%. And the reason why their number was much lower is because they were relying on world data for all US and non-US users, Android and Apple. I have clients that are targeting 97% iOS users in America–so obviously, for them, the number of end of loss data is much higher. Today, Facebook says their number is 8%, down from 15%. And my clients are seeing somewhere between a 20-25% drop in attribution even now because of the iOS change that was made almost a full calendar year ago.

Come back next Thursday for the next part in this three-part series!