MAJOR UPDATE (4/14/22): Musk has since offered to purchase Twitter

This comes on the heels of several recent Tweets from Musk regarding free speech on Twitter:

@
Free speech is essential to a functioning democracy. Do you believe Twitter rigorously adheres to this principle?
@
The consequences of this poll will be important. Please vote carefully.
@
Given that Twitter serves as the de facto public town square, failing to adhere to free speech principles fundamentally undermines democracy. What should be done?
@
Is a new platform needed?

Overall, Musk has not expressed the most positive of feelings towards Twitter recently: 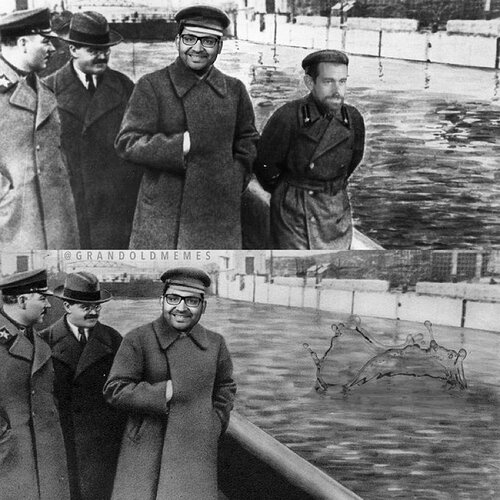 What do you think is Musk’s plan here?

Also: what do you think about Twitter’s relationship to free speech? (Musk seems to find the platform’s policies overly restrictive.)

Musk is now on Twitter’s board of directors. Per reports, this may have been a move to prevent a future takeover, as board members cannot hold more than 14.9% of company stock.

@
I’m excited to share that we’re appointing @elonmusk to our board! Through conversations with Elon in recent weeks, it became clear to us that he would bring great value to our Board.

Twitter CEO Parag Agrawal has already expressed that Musk’s inquiry about an Edit button is “important”:

@
The consequences of this poll will be important. Please vote carefully.

The saga continues; Twitter CEO Parag Agrawal has announced that Elon Musk is not joining Twitter’s Board of Directors after all: 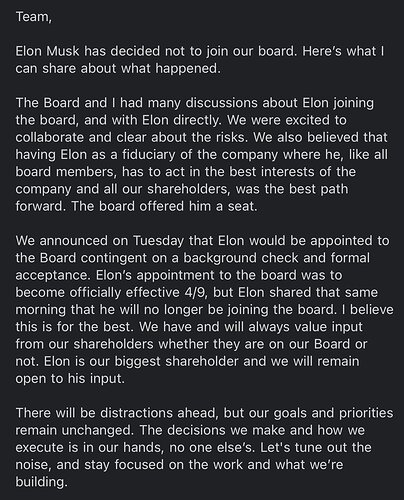 @
Elon has decided not to join our board. I sent a brief note to the company, sharing with you all here.

Musk was busy on Twitter over the weekend, posting (and deleting) a series of Tweets that mused on various changes to the platform.

Do you think this change in board membership was Musk’s doing or Twitter’s—and why?

What do you think this means for Musk’s involvement in the company?

Musk has now offered to purchase Twitter in a cash deal for $41.39 billion

Twitter’s free speech policies are fine; even lax, in parts of the world outside North America. This free speech tweeting is an attempt to bastardize the First Amendment and lead to a Facebook-like hate click model for profit.

IMO, Musk is a good businessman and therefore, if he profits from putting a dog leash on all of us, he will find a way to tweet about it while making it sound like it is in our interest. I believe Twitter will turn into a sophisticated, but scammy hellsite. The rebrand will come from policy pushes instead of design or product and encourage the most reactive ones. It is also at odds with the SEC investigating his Twitter use to manipulate Tesla stock and crypto prices so it’s anybody’s guess what happens now.

I’m on Twitter every day, multiple times each day. It was the first social site I joined in 2008. It will be fine. Twitter has suffered more from time to time. I read all of Elon’s tweets and I don’t think people realize how much tongue in cheek he is. As in all social platforms - it is what you make of it.

Personally, I’m no fan of Elon Musk. Too many people bow at his feet every time he says anything. It gets old to me. Aside from that. I don’t (personally) think he’ll mess with it too much. I’m sure he has other endeavors that are more important to his wallet, I mean mind.

Any social media platform is what you make of it. The block and mute features are your friend. If you don’t like something you see from someone, I recommend using those instead of blaming the platform. Just as in real life, if someone says something you don’t like–I would assume you just walk away and not blame their parents

I agree that (after we get the edit button) he will focus on other things. And I AGREE SO MUCH on the statement - “Any social media platform is what you make of it.” Reminding people that they have the power in their own hands to shape what they see and read seems to be a constant task. And as much as I agree that we need to see all sorts of opinions on all sorts of topics, I do think we hold the power to shape it to our desired experience.

You can always pay the $1.99, or whatever per month for Twitter Blue & have the edit button now.

True. Should have said - when all of us get the edit button -

No worries! It should’ve already been there. The edit button I mean.

I subscribed to Twitter Blue for a month for the edit button - but in practice, the edit button is just a delay posting (30 seconds I think) so you can review your Tweet before it gets posted. Once it’s on Twitter, you can’t edit.

I’m way on board for an actual edit button!

As far as Elon Musk goes, I’m interested to see how it plays out.

Interesting news that he is not joining the board! Now he wants Twitter headquarters to be used to house the homeless. (I’m located in the SF Bay Area so of course they made a HUGE deal about this on the news.)

I don’t think he was serious about that one, but it’s hard to tell with him…