🚨 BREAKING: Elon Musk Twitter deal is back on (for now) 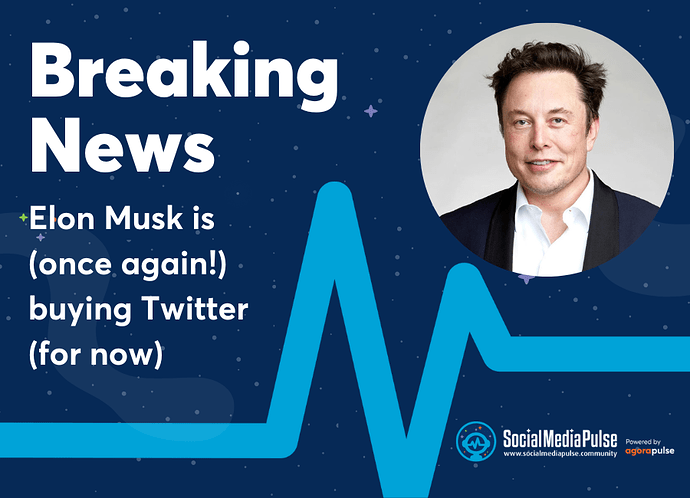 The latest step in Elon Musk’s messy, litigious path towards purchasing Twitter (which, as you may recall, began with becoming TWTR’s largest shareholder, continued when he made his formal offer to purchase the platform for $44 billion, and was controversially approved by the board, only to hit a snag when Musk questioned, among other things, the platform’s sizeable “bot” population, and tried to pull out of the deal, resulting in legal action from the Twitter board):

As of this morning, the deal appears to be back on.

Twitter filed a document yesterday with the Securities and Exchange Commission, based on a letter Musk sent to the Twitter board on Monday, agreeing to close the transaction at the original $54.20 per share.

This news comes two weeks before legal proceedings against Musk were to begin—and does not negate them. Twitter will have to separately declare if it is dropping its case against Musk.

On behalf of X Holdings I, Inc., X Holdings II, Inc. and Elon R. Musk (the “Musk Parties”), we write to notify you that the Musk Parties intend to proceed to closing of the transaction contemplated by the April 25, 2022 Merger Agreement, on the terms and subject to the conditions set forth therein and pending receipt of the proceeds of the debt financing contemplated thereby, provided that the Delaware Chancery Court enter an immediate stay of the action, Twitter vs. Musk, et al. (C.A. No. 202-0613-KSJM) (the “Action”) and adjourn the trial and all other proceedings related thereto pending such closing or further order of the Court.

The Musk Parties provide this notice without admission of liability and without waiver of or prejudice to any of their rights, including their right to assert the defenses and counterclaims pending in the Action, including in the event the Action is not stayed, Twitter fails or refuses to comply with its obligations under the April 25, 2022 Merger Agreement or if the transaction contemplated thereby otherwise fails to close.

What do you think will happen here?

I think he would rather buy it, than having the hassle of going to courts and back n forth

Maybe he’ll shake stuff up and we’ll have a “new” platform to explore!

Given his recent ardent support for the Russian position in the Ukraine invasion (advising Ukraine to simply surrender the lands Russia invaded), I am fairly certain he’d make Twitter a much worse place in terms of spread of misinformation.

Oh man—he did??? Ugh, I’d tuned him out enough to not even notice that.
That is NOT OK.

Yup. There are very few things in this world that are black and white, but Russia illegally invading Ukraine and committing war crimes is one of them. There’s a clear bad guy and you’d have to have the intellect of a rutabaga or be in an entirely different reality not to recognize that. I have many more thoughts on it all, but this isn’t the place for politics. 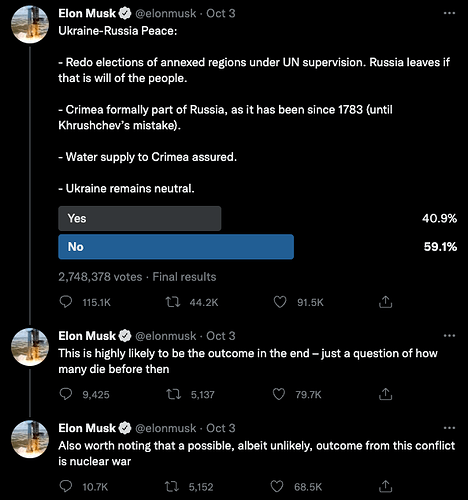 Elon is very…opinionated. As per usual.
Hoping the SEC and the FCC will be keeping a close eye on him if he takes over Twitter…especially his fundraising…

Apparently they were going to make certain embarrassing text messages public from the discovery process of the lawsuit, so it’s less embarrassing to just buy the company.
He’ll probably do a load of changes to try and pump the share price up (that is his main skill!) and then try and sell it to someone else.

Yes, I’m excited about that!