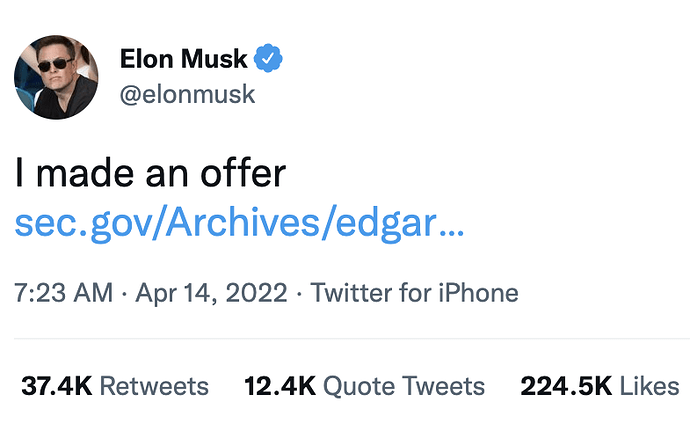 We knew this was coming…

This morning Elon Musk continued his incremental (yet rapid) attempt to take over Twitter by formally filing a bid with the SEC to purchase the company for $41.39 billion:

@
I made an offer https://t.co/VvreuPMeLu

Key highlights from the filing (which may be viewed in its entirety here):

I invested in Twitter as I believe in its potential to be the platform for free speech around the globe, and I believe free speech is a societal imperative for a functioning democracy.
However, since making my investment I now realize the company will neither thrive nor serve this societal imperative in its current form. Twitter needs to be transformed as a private company.
As a result, I am offering to buy 100% of Twitter for $54.20 per share in cash, a 54% premium over the day before I began investing in Twitter and a 38% premium over the day before my investment was publicly announced. My offer is my best and final offer and if it is not accepted, I would need to reconsider my position as a shareholder.
Twitter has extraordinary potential. I will unlock it.
Elon Musk

Do you agree with Musk’s oft-repeated claims that Twitter has endangered free speech?

What changes do you think Musk will make if he succeeds in privatizing Twitter (which first went public in 2013)?

I’m wondering how this will be impacted by Section 230, and if Musk’s next move is taking on the FCC…

This is so wild, first off. Clearly we’re all going to get the edit button that we’ve been screaming for for years now… but I don’t know WHAT he plans to do. This guy is so hard to read. The fact that he wants to completely own Twitter and take it private again makes me wonder how much he’s planning to change the platform, and what those changes might look like.

I’ve been all in favor of an edit button for obvious reasons. But I hadn’t thought about possible implications. Imagine embedding Tweets in a blog post and later they are changed to something NSFW. I suppose we’ll have to be more particular about whose Tweets we embed. Twitter is also a place where famous people get called out for saying stupid/awful things. If they can edit their Tweets, is there a record in case it’s needed for an investigation?

It appears the Edit button is likely to be timed, thus not allowing for much time for it to go viral. It also may have a record, like Facebook does, where it lets you know that something’s been edited and lets you see the previous version.

Whilst an edit button is great, I have huge concerns over the rise of the Oligarch globally. Elon most definitely has some very firm views on things. Having worked in cybersafety for years with kids, the thought of hate speech and bullying being given laxity concerns me greatly. I also go back to my work with online reputation and wonder how much this new “freedom” might actually damage reputations. We as a society seem to have forgotten that democracy means responsibility as does freedom. We must protect our children and allow them to have a childhood that is not infiltrated with adult content. Elon doesn’t have much concern in that area from statements I’ve read from him.

I am VERY concerned about all of what you just said.
I think Elon is going to encounter massive levels of resistance from world governments to a degree he’s not yet seen. Europe’s already starting in on him regarding the whole “platforms are responsible for what’s posted on them” angle. (As they ought, in my opinion.)