It’s been widely known now that AI that make art has been using copyrighted images they trained on to produce their content. The question was, will anyone do anything about it? I think it’s a serious issue, and while I don’t mind AI making art, I believe that it should be ethically sourced. Whether its people being paid to be put into the training or volunteering their work.

So here’s the first lawsuit I’ve heard of: Getty Images is suing the creators of AI art tool Stable Diffusion for scraping its content - The Verge

Because Stable Diffusion dataset is open source (and that’s great) we can easily tell that it was trained on Getty Images. Other AI projects are not so open.

Here’s a pic from the article! You can see the getty images branding on this AI generated art. 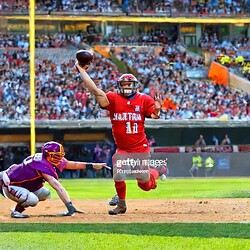 There is the argument that its fair use because the AI did not technically use the directly copyrighted image in its production.

What are your thoughts?

Getty is a nightmare when suing! They go after everyone…figures they are the first!